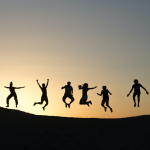 In 1999 the Speed Tech Synergy won the Most Innovative American Design award. Designed by Jim O’Young, a well know target shooter in competition. The Synergy was its time way ahead, being an integral and build on order and with custom work. Parts were produced by Hogue and the Tanto blades were handground by Allen Elishewitz. Ano work was done by another company I forgot the name. Unfortunately SpeedTech did not survive. The Synergy was simply to expensive for most people and to labour intensive.
Some pictures:

Now, 20 years later, during Blade Show 2019, the Synergy2 will debut. In collaboration with Jim, the designer, we redesigned and improved his design. Now it is a full Titanium integral, framelock and in 5 varieties, being 2 with Tanto blade and 3 with Triling point.
Some pictures: